Friends,
January 20 is Sanctity of Human Life Sunday. My guest blogger is author Dianne E. Butts. She has interviewed many women (and men) who have experienced an unplanned pregnancy and chosen to abort. Dianne has a great heart for people in this situation. Even if you have not directly experienced abortion, you most likely know someone who has. Dianne’s words provide hope and healing for those personally affected and perspective for those indirectly touched.
Blessings to all,
~Lori
January 22, 1973, the U.S. Supreme Court handed down two decisions which would change the course of United States history as well as tens of millions of lives. Roe v. Wade and Doe v. Bolton legalized abortion on demand. Since then more than 54 million abortions have occurred in the United States. In 1983, President Ronald Reagan designated the Sunday in January closest to January 22 as Sanctity of Human Life Sunday. This year, January 20, 2013, is the 40th anniversary of these Supreme Court decisions.
On this day or upon hearing these statistics, many people think of the lives lost to abortion. But I also think of all the other lives touched by it. Not only millions of women, but men, parents, grandparents, families, and society as a whole have been affected.
When we start talking about abortion statistics or Sanctity of Human Life Sunday, I can almost feel these women and men cringing. Some are crying inside. Some are running. Many are secretly suffering in silence, knowing and regretting the choice they made.  I want to speak not only to those who are secretly hurting but to everyone else reading this.
While writing my book, Deliver Me, about unplanned pregnancy, I worked with many women and men who shared their stories. The one statement I heard repeatedly was, “I thought I had committed the unforgiveable sin.”
There is only one unforgiveable sin…and abortion is not it.
The Bible says, “If we confess our sins, he is faithful and just and will forgive us our sins and purify us from all unrighteousness” (1 John 1:9).
To women who have experienced abortion: this is not the unforgiveable sin. God loves you. He will forgive you if you only turn to Him and ask. Many men also feel the burden of unforgiven sin. Whether or not he was involved in the decision, he often harbors regrets that he did not take a stronger stand or left the decision to her to make alone. To you I say, God loves you, too. And… He will forgive you if you only turn to Him and ask.
The only unforgiveable sin is to reject the Savior, Jesus Christ.
Most people seem to think some sins are worse than others.
Some think the sin of abortion is worse than most other sins. But the truth is all sins carry the same level of punishment: death. Another truth is we each are guilty of something. Equally true is that God is willing to forgive every sin when it is recognized, confessed, and turned from. “For the wages of sin is death, but the gift of God is eternal life in Christ Jesus our Lord” (Romans 6:23).
To those who have not experienced abortion, if you harbor anger toward those who have you need to do some work with the Lord God. I once spoke with a man who appeared very self-righteous, hanging on to his anger toward his mother whom he learned had aborted his sibling. Matthew 6:14-15 says, “For if you forgive men when they sin against you, your heavenly Father will also forgive you. But if you do not forgive men their sins, your Father will not forgive your sins.”
As you contemplate the meaning of these verses, it is my hope and prayer that you will let go of past sin, confess it, and ask God for forgiveness, so you can move forward into a new life with Jesus Christ as Savior. 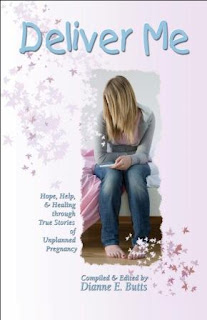 May you find Life on this Sanctity of Human Life Sunday.
For you, O Lord, have delivered me. …
You delivered my soul from death,
my eyes from tears, my feet from stumbling,
that I may walk before the Lord in the land of the living.*
(*Dianne’s paraphrase of the Scripture that inspired the title of her book,
Deliver Me, Psalm 116: 8-9.)

Dianne E. Butts is the author of Deliver Me: Hope, Help, & Healing through True Stories of Unplanned Pregnancy (Connections Press). This book won Book of the Year (Family/Relationships) from Christian Small Publishers Association. Her other books include Grandparenting Through Obstacles: Overcoming Family Challenges to Reach Your Grandchildren for Christ and Prophecies Fulfilled in the Birth of Jesus. For more information go to www.DianneEButts.com or www.DeliverMeBook.blogspot.com