Annoyances a Catalyst for Prayer 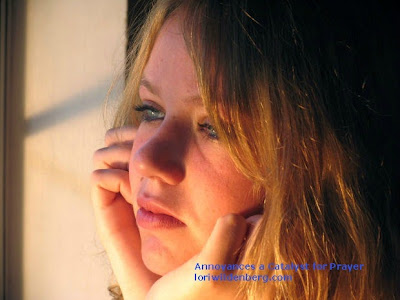 God supernaturally intervened in a very difficult situation in my family recently. Suffice it to say we had a HUGE victory. A real God Boasting kind of win. I wanted to do the King David happy dance… fully clothed..of course (2 Samuel 6:14).

Then I received an unkind blow. I should have been ready. So often after a spiritual victory comes an attack.  I was surprised. Shocked. What a distraction. Instead of rejoicing my thoughts turned to retaliation. (Okay not really but I love the alliteration). The incident was, however, annoying and it occupied a large space in my brain. This caused me to think about the verse in Hebrews 12: 1-2 regarding prayers being hindered.

The unkindness was hindering my prayers of gratefulness and thanksgiving.

It was getting in the way of my joy. My thoughts were bouncing from, How mean… to… this person must be really hurting to do this. The volley of thoughts moved back and forth from self-righteous type anger to compassion. The ping pong game in my brain continued.

Then I got some wise counsel, “Every time you think of this situation, pray a prayer of thankfulness about the victory instead.”

Well, what do you know? By being intentional about my focus rather than allowing for the distraction, I found myself praying a TON!

How great- using annoyances as a catalyst for prayer!

That battle went on through out the day. Because I was praying sooooo much, I learned something about myself. (I’m sure Tom could have told me this. Come to think of it, he has!) When I am hurt, I roll around in that… sort of a lot. (Not good)

When I continually revisit  pain, I miss the critical stuff God has for me.

When curt comments or toxic verbal weapons are tossed about I have heard this advice, “Consider the source.” But I don’t like that. It  feels dismissive and sounds like a put down.  I know I’m no better than- The Source. Instead, while processing nastiness, I will choose to remember how people treat others is a reflection of how they  feel about themselves or an indication of how they have been treated by someone else. When I look at it like this feelings of compassion are generated rather than big bad mad. Even though unkindness is often delivered as a direct personal hit, I am learning to not take it personally, move along…looking at what God wants me to concentrate on or pray about.

There are times boundaries must be built when healing is not going to be a part of the package. Generally speaking it is best to overlook an offense. But…I’m not saying we should  turn into punching bags. There are times I have spoken up or asked questions. And then other moments when I have decided to excuse myself. Some battles are worth the fight or the inquiry, others are not.

Here’s what I am learning from the hurt the Lord allows in my life: I want to be the type of person who gives another the benefit of the doubt before making a judgment, asks before accuses, inquires before assumes. I want to give another a good amount of grace space. It’s quite possible, I may not know everything that is going on with the individual who generated the meanness. I want to love instead of lash out, to seek understanding rather than jump on criticism. And when I do come out swinging and make assumptions, I  want to be someone who asks for forgiveness.

He who covers an offense promotes love.
Proverbs 17: 9a
What wisdom have you gained when you have been wounded?