Presidents in the Buff 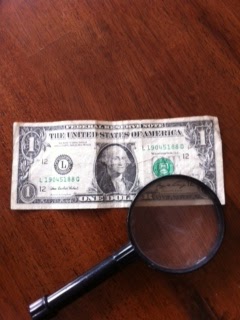 Picture taken by Lori Wildenberg
History buff…not me. Memorizing  facts, dates, names of people who are long gone….What a SNOOZE. Unfortunately, I most likely infected at least three of my kids with the history doldrums. (What a fail!)

Actually, I am beginning to discover history is far from Dullsville. If presented in an interesting way it is (I can’t believe I’m saying this) exciting and enticing.

Look at the fun facts I discovered about the one-dollar bill.

• On the front of the bill is George Washington, first United States President. Prior to being the president he was a General and a chaplain in the army! And… kids love this…he didn’t have wooden teeth but he did have a cow’stooth!
• The reverse side of the dollar contains both sides of the Great Seal of the United States adopted in 1782.
·         To the left, is the eye of Providence on top of the pyramid recognizes God’s involvement in the affairs of man. On the bottom is the date 1776 with the words Annuit Coeptis, which means “He (God) has smiled on our undertakings.”
•    On the right is the American Eagle, our national symbol. The eagle’s
talons hold a cluster of arrows and an olive branch. The arrows
represent defending the nation and the olive branch, peace. The
eagle’s shield has 13 stripes depicting the 13 colonies. (Just like the
U.S. flag.) The eagle’s beak holds a ribbon that reads E pluribus Unum,
the official motto of the United States. It means “out of many, one.” The
colonists were immigrants representing many different countries but
uniting together.
•   Above the word ONE on the backside of the dollar is the phrase In God
We Trust.  The very last bill signed by President Abraham
Lincoln required this declaration to be present on all currency.
In my quest to find out more about The United States of America I have discovered that Christians were an integral part of building our nation. February is a perfect month to focus the heritage of the U.S.A. and on the influential people in our country’s past. This is the month America celebrates black history and the presidents.
Now…grab a kid, a dollar, and a magnifying glass. Examine the bill. And while you are at it…the number of thirteen like items is seen in more places than the just the shield. Go on a National Treasure Hunt of your own and discover all the spots the thirteen things show up. Have fun!
You have given me a heritage of those who fear your name.
Psalm 61:5b
What attitudes have you passed along to your children?