Sheep Among the Wolves

Friends, Meet Jaclyn Caceres, a blogger mom of four with a farm in Florida! That’s right. A farm in Florida.  “Amen, Sister,” was my response after reading her post. Our society seems to be becoming more and more angry, intolerant, and mean spirited. What is going on? Why can’t we be respectful even when we disagree? We don’t have to give up our beliefs or convictions to be respectful of differing opinions or points of view. Let’s dialogue not debate. Let’s have conversation not condemnation. 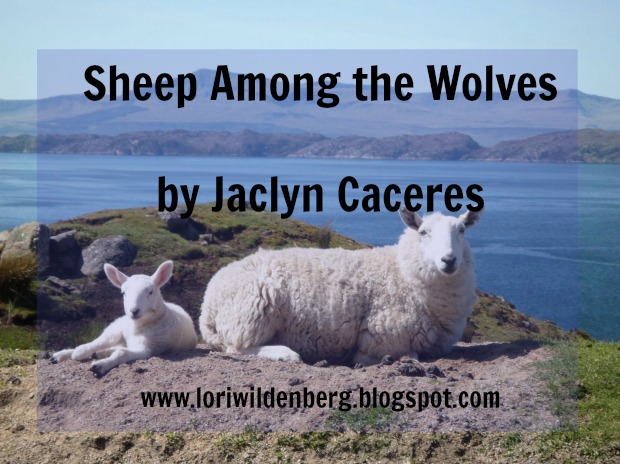 Sheep Among the Wolves by Jaclyn Caceres
Today I read a post on another blog site that I have contributed to in the past on talking to kids about sex.  I didn’t even click on the actual article, just on the comments below.  I can honestly say I was shocked and saddened at how mothers are treating each other.  When did we become a society that hurts each other or doesn’t allow each other to have our own personal beliefs?  Why does the way one mother choose to raise her child have to incur negative comments from others? I guess I should start from the beginning.
I usually surf the web in the mornings for anything interesting or newsworthy to write on, anything that strikes me as interesting when my personal life hasn’t produced anything exciting.  Today was one of those days.  Because the internet is so diverse and full of opinions, I try not to get too “political” or “religious” since I try to respect the beliefs and ideas of others and don’t like to impose mine on anyone.  However, today I feel different and it’s not even for the reason you might think.  The article was about talking to little kids on sex and how this particular person feels it’s okay to tell small children the “truth.” Though I particularly don’t agree because I believe children need to be innocent for as long as possible, I respect this particular mother’s decisions.

Then I read the comments.
Women, mothers, came out of everywhere giving their thoughts on how great an idea it was to tell small children about something that should only be happening between adults. (Again, turning a blind eye to other people’s life choices).  Then this particular person stated how happy she was to read this because she “hates” people who tell her child they were made by “god” and some “imaginary person in the sky.”  Another person had the “nerve” to say they did believe in God.  That’s when it started.
Now, I understand not everyone believes in God or has the faith that I do but here’s my issue… why put someone who does have faith down? Why hound them or say horrible things to them because of a belief? Why be mad, angry, or insulted at someone for saying that God put a baby in a mother’s stomach? If you don’t believe simply say “thank you” and move on with your day.  It’s that simple.  No rudeness, just politeness.  Maybe that person said that because they were unsure on how to answer the question.  Maybe they didn’t want to have a talk with a child that was not their place to have.  Whatever the reason, there’s no justification for being rude or obnoxious to another human being.
At the end of the day, I feel sorry for these people.

Not because they don’t share my faith, which has brought me so much joy, but because they feel so hollow inside that they have to bring another person down or they have to ridicule an entire faith to make themselves and their points valid.  We have become a society where everyone is offended and no one is happy.  Our children are not only listening to us when we speak but are mimicking our every move.  People are constantly complaining how this generation of children is rude, disrespectful, obnoxious etc.  but the ones to blame are ourselves.  It is up to us to teach this next generation tolerance, respect, gratitude, and decency.  But in order to teach it, we have to live it.  We can’t go on and on about tolerance and then put down and harass someone who doesn’t share our particular belief.  That makes us hypocrites.  If we want our children to be mindful of their manners, respectful of others and become good adults in the future, we need to become those things ourselves.  Our children will turn into whoever we mold them to be.
And believe it or not, the internet is forever.

What is posted there today, will be found tomorrow.  I pray for these people who are so empty, so angry, and so resentful.  And I pray for the next generation of children who are learning from them to be the same or worse.  Mostly, I pray for my own, innocent children who do believe…I mean KNOW  that God put them in my belly and gave me the gift of being their mother.  I pray that the day they come across one of these individuals that they will be given the wisdom to not only know how to respond to the criticism but to pray for them.  Because in tomorrow’s world, my children will be sheep sent out among wolves… Right?
“Behold, I send you out as sheep in the midst of wolves;
so be shrewd as serpents and innocent as doves.”
Matthew 10:16

Jaclyn Caceres is a former Reading Specialist, and wanna be writer who gave up teaching when she had her first baby. After staying home for a number of years chasing four children, her husband, yellow dog named Patton, chickens, and a pet lamb named Chloe, she decided to take on even more by joining the family business. When she finds a few precious moments to herself, she goes back to her writing roots. She enjoys writing about anything that inspires her whether it be her own life or the lives of those around her. www.thoughtsfromthemiamifarm.com